Living 'betwixt and between' identities

If you thought a book about the orthographic significance of the hyphen would be dull, think again.

In her new book, appropriately titled “Hyphen,” ASU Dean of Social Sciences and Director of the School for Social Transformation Pardis Mahdavi learns to embrace the oft-misunderstood punctuation mark, opting to celebrate its possibilities rather than dwell on its potential ambiguity.

As an Iranian American, Mahdavi struggled to come to terms with her “hyphenated identity” for years until she realized she could find belonging in the duality. “Hyphen” tells the story of that journey, along with those of three other similarly “hyphenated” individuals, interweaving their narratives with the long, complex history of the hyphen itself.

On Monday, June 21, Mahdavi will join Steven Beschloss, director of ASU’s Narrative Storytelling Initiative, for a virtual conversation about “Hyphen” hosted by Changing Hands Bookstore. It is the second event to feature an author from Bloomsbury’s “Object Lessons” book series, which explore the hidden lives of ordinary things. ASU Regents Professor of English Ayanna Thompson spoke about her own “Object Lessons” book, “Blackface,” at an event in April.

ASU Now spoke with Mahdavi ahead of Monday’s talk to get a taste of what’s to come. 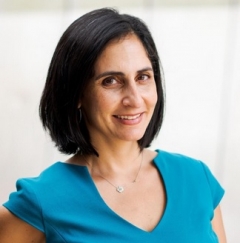 Question: How did this book come to be?

Answer: I'm Iranian American, and as I talk about in the book, I always struggled because I was trying to either fit into “Iranian” or “American,” and I was searching for belonging for so much of my life. When I realized that I could actually find the belonging inside the hyphen itself, it was such a liberating moment for me.

I think one of the mistakes people make — when thinking about hyphenated identities — is they only go back to World War II, when there was this attitude that “a hyphenated American is not an American.” But if you actually go to where the hyphen starts — which is in the second century — Dionysius Thrax, who created the hyphen, actually writes about this. He writes about how he created it to show two words that belong together. He created the hyphen to create belonging. And when I started to learn that, I was like, oh my gosh, this is a history orthographic concept that has been totally overlooked. Then when I started to read about (Johannes) Gutenberg, who brought the hyphen into common usage, I learned that he did it because he wanted to create harmony in his split identity as an artist-poet and as a metalworker. So he was able to bring those loves together by creating this kind of poetry that the hyphen allowed him to make beautiful on the page.

Q: What did you learn about the relationship between language and identity while writing this book?

A: What I learned that was most inspiring to me was that — and it should have been obvious, because I'm an anthropologist, so I know that people make culture, culture doesn't make people — but people also make language, and language actually has the power to make belonging. It can make belonging, or it can break belonging. I also learned that language has the power to unify, but also to be divisive. Just like the debate around the hyphen itself. So you can choose to focus on the divisiveness, or you can choose to focus on the unification.

Q: That’s interesting, because Part 2 of your book is titled “Hyphen as Divider.” Tell us more about that.

A: The book is set up like a play, in three acts. So Part 1 is looking at the history of the hyphen and how it came about. But it's interwoven with my story and the stories of three other people who are trying to figure out the question of, "What is my history?" And that's why I call Part 1 “Ancestors Worshipped,” because I had this moment where I had to think about, am I betraying my Persian-ness by how I'm going to school in Minneapolis-Saint Paul — a hyphenated city, no less? So it’s this question of, "Who am I?" And I start to answer that by going into the history of the hyphen, which is this thing that's supposed to make belonging.

But then when you come into the 1900s, that's the moment where it's seen as a divider. That's the moment where you have John Wayne saying a hyphenated American is not an American, where you have Roosevelt saying the same thing, where you have Woodrow Wilson saying the same thing. So you have people dropping the hyphen out of the term “Japanese American,” because it signals divided loyalties. So that's the moment where you have the demonization of the hyphen, and that mirrors this kind of battle that the characters in the book are going through, where it's like, "I’ve got to pick, am I Iranian or am I American?" And it's this maddening thing where they’re constantly feeling like they’re betraying one side or the other. And I talk about being in America on 9/11 and being Muslim and brown, where there was this sentiment of, “You don't belong here; get out.” And it's so similar to what we saw in World War II with people identifying as hyphenated and being told to get out. They were considered to be “not real Americans,” even though, of course, every American is a hyphenated American except for Indigenous Americans. So that part, too, is sort of a moment of wrestling with this idea.

And then Part 3 is the resolution, because it's the moment where I, and the other characters, figure out that we can live in the hyphen. And it's also the moment where we can see that the hyphen itself has this power to not only join, but to create new concepts. So I look at, for example, when the shorter Oxford English dictionary came out in 2007, people said, “There's a hyphen thief on the loose, 16,000 words have dropped their hyphen.” And yes they have, but there are new hyphens. And when you actually track the journey of the hyphen, the hyphen is a way station to creating a new word. So “email” was “e, hyphen, mail,” but now it's just “email.” But then the hyphen was inserted into other words. So I get into this idea of embracing the power of the hyphen; that you don't have to be on one side or the other, you can be the beauty that is both.

Q: Who is “Hyphen” for, and what do you hope they take away from it?

A: I think “Hyphen” is for pretty much everyone. And especially anyone who has struggled with the question of, "What is my place in the world?" I think we're in a moment where people move more quickly than ever before, and we have cities and states, which are majority-minority. And we should be thinking about what that means. What does that language, “majority-minority,” even mean, you know?

I hope that it provides people the solace that (reading and writing about) it provided me when I felt that I was neither here nor there, that I was betwixt and between. So many people who are hyphenated feel lost or stuck, and my hope is that it will provide a sense of belonging by showing that you can live inside the hyphen, and you don't have to pick one side or the other, and the hyphen itself creates new identities, and you can create a new way. You don't have to be the model archetype. So my hope is that this will provide some context and be a sort of road map to a sense of belonging.